Neil Diamond's Sweet Caroline took on more meaning last week than its original 1969 intent or its unusual and inexplicable performance as an anthem of Red Sox Nation.

Capped by a surprise Fenway Park performance on April 20 by Neil Diamond himself, it transformed into the unifying theme of “Boston Strong” as it was also played at sporting venues across the USA.

According to Billboard magazine, subsequent sales of the 1969 top 5 hit skyrocketed to 19,000, making it the 103rd most popular download in the country. Neil Diamond also announced his intent to donate proceeds from those sales to the victims of last week’s Boston tragedy.

Born itself out of the tragedies and upheaval of the 1960s, Sweet Caroline has interwoven itself with history and is, once again, showing that music has the power to heal.

The concept of "Boston Strong" was created by 2 Emerson College students Nick Reynolds and Chris Dobens.  Here are links to purchase Boston Strong T-shirts and B Strong caps:

At $20 each for either item, the majority of proceeds from sales will go to The One Fund Boston, a charity established by Boston Mayor Tom Menino and Massachusetts Governor Deval Patrick and will directly benefit the victims of last week's senseless tragedy.
Posted by Chris Pickett at 12:58 AM No comments: 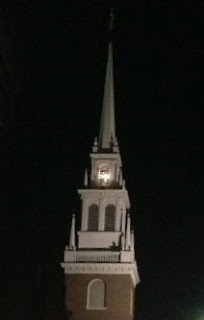